I have been saying that I wasn’t going to watch a new show this summer and just finish shows I’ve already started.  Or get back to watching shows that I stopped watching though they’re still running. Yes, I’m looking at you, Sket Dance. So I was scrolling through Crunchyroll when my eyes glanced upon a show called Natsuyuki Rendezvous. I vaguely remembered reading a clip about the show and the only thing I remembered was that it was aimed at adult women. But what caught my eye was that the characters were adult on the screenshot Crunchyroll provided. They weren’t middle school girls prancing about with ridiculous short skirts on; it was a woman and two guys surrounding her. I thought, “Hmm…this will most likely be a romance and there are flowers so it must be cute.” Then I started watching and the first episode was much more than that. It was cute but hilarious! You’ve got a florist who’s haunted by her dead husband except she can’t see him but the man who has fallen in love with her can! Problem is the dead husband isn’t too happy about the possibility of his widow having a possible suitor. The possible suitor; Ryosuke, isn’t happy about seeing dead people, either. Hence, we have The Sixth Sense; anime romantic comedy style. 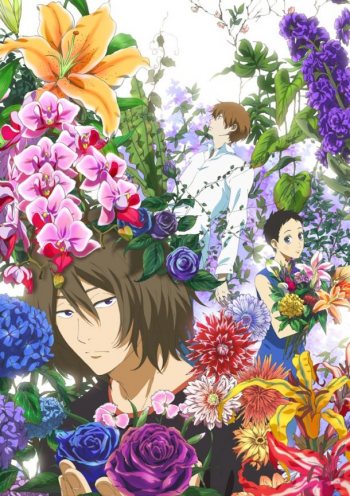 As many anime shows before it; Natsuyuki Rendezvous comes from a manga written by Kawachi Haruka; a woman! I don’t read manga often; just manga from shows that I have really enjoyed. If this show turns out to be any good; I may end up checking out the manga. The first episode was pretty cool for a premiere and I really had no idea what to expect. Maybe I was feeling a little sentimental because I just got engaged the day I watched it. Who knows but I found it cute and endearing. I bet the anime will have great art with the main character being a florist; I expect to see tons of pretty flowers (girlish squeals!). It was also cool to see a main female character with short hair. I really was taken in by her haircut as it brought attention to her blue eyes. The male main character has sleepy eyes, they look more like he’s not interested in anything but I found myself drawn to them. I’m hoping its a change a pace from the inundation of moe (which I have nothing against) and the overload of fanservice direction shows seem to have been going lately. It is refreshing to see an anime directed at adult women; something we don’t seem to get often. Now Natsuyuki Rendezvous is not the only first episode I’m going to watch. After reading this blog post by @fkeroge over at AOIA; I’m going to watch the first episode of Humanity has Declined. From his (or her) post, the show looks like it might be quirky and if you have learned anything from reading my blog; I like wacky things. Are you watching the summer season? If so, what are you watching?