Not Your Kid’s Show 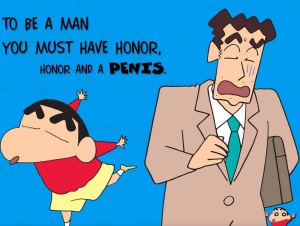 Honor and a Penis! Shin Chan. Definitely not your little children’s show. One of the few anime I thank Adult Swim for introducing me to.  Shin Chan is a show that I can watch more than once and I can’t say that about many shows. It makes me laugh every time I’ve watch it.  Shin Chan is completely inappropriate and I would compare it to Family Guy in terms of the type of humor except its better and less offensive.  It is a show that is not on Crunchyroll but is on Hulu Plus. Shin Chan is a kindergartener with  a gutter mouth and very little respect for adult figures except when he wants something. Shin Chan is hilariously disrespectful and is willing to go tho extremes to get what he wants; that includes going on strike. The anime was birthed from a manga (how many shows didn’t come from manga?) and is still running; just not on Adult Swim. It is potty humor at its finest and its more hilarious because it is a small child spouting it out. Shin Chan was the first anime that I saw that made no qualms about showing a penis. I’m pretty confident to say that I was most likely taken aback because generally one doesn’t see a penis in a non-sexualized setting in an anime. That was my experience until Shin Chan. For Shin, to be a man,”You must have honor and a peeenis!”

Do I have a gutter sense of humor? Probably. However, I think the show was the most amusing for me because of Shin. It would not have been as funny if all the characters were adults. The funniest characters were the children who made adult statements that were completely out of line. The show didn’t just deal in potty humor. It explored family dynamics and relationships, work life (having to kowtow to your boss), housing, and financial issues. In a sense, it was very real and down to earth.  Shin Chan can be viewed on Hulu with limited commercial interruption, the only option is dubbed on Hulu but the dub is pretty good. The animation looks like it could have been drawn by a child but that makes it all the more endearing. And remember Shin can so wipe his own ass!

I watched and sang this theme song every single time.